Head over to my new website, dunhamwriter.com, for the latest on my writing and more!

My debut novel, The Other Side of Hope, is an alternate history novel set in a world in which the global roles of Islam and Christianity have switched places. You can find it as an eBook on Kindle, Kobo, Google Play,  iTunes, Nook, or a paperback at Amazon and the CreateSpace store. 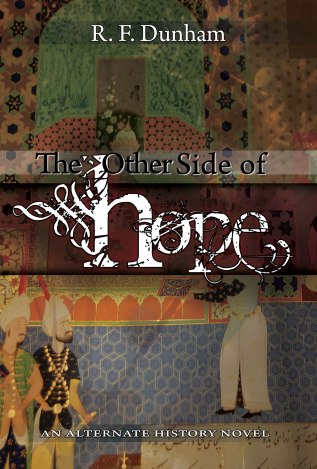 In 732 A.D., the Frankish and Burgundian forces led by Charles Martel defeated an army of the Umayyad Caliphate led by Abdul Rahman Al Ghafiqi and halted the Muslim advance into Christian Europe. At least, that’s what happened in the world as you know it.

Step into the world of The Other Side of Hope, where the world as you know it is turned on its head. A world where Charles Martel fell on that field south of Tours, France and was never given his nickname, “The Hammer.” A world where Europe came under Muslim rule and Christianity was eventually forced to flee to the shores of a distant land in search of religious freedom. A land where, without support from European colonial powers, they found only conflict and poverty.

In the modern day, this world remains divided. The wealthy Muslim East and the poverty-stricken Christian West are constantly at odds. A single spark is all it takes to ignite fresh conflict and the cycle seems never-ending.

Follow the paths of Ethan Lewis and Hamid Damir as they are put on a collision course with the other side. Will they find hope for a brighter future or be lost in the despair of intractable conflict?

Free Serialized Stories to Your Inbox!

Click here and subscribe to free serialized stories from the world of The Other Side of Hope and the fantasy world of The Samokei Chronicles.

Free Serialized Stories to Your Inbox